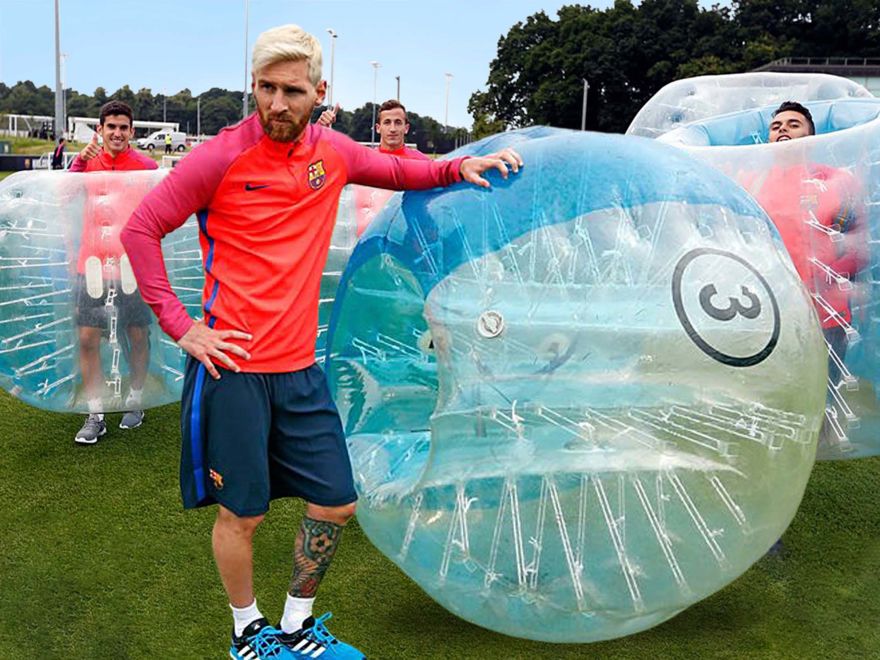 What is the Bubble Football in Manchester?

An unforgettable experience like no other, get ready to roll, bash and crash your way around a pitch in a hilarious attempt to bag yourself a goal. After a brief talk with your events coordinator on the rules and the ins and outs of the event, its time to get your kit on – which in this case is a zorb bubble suit! Considering as you won’t even be able to see your feet whilst you’re encased inside this bubble, scoring a goal will be pretty tough so you will have to bounce around the pitch and knock over the opposing team to increase your chances. The events coordinator will monitor the match, keep track of scores and announce the victorious team at the end of the session.

Where is Zorb Football in Manchester Hosted?

There are a number of different venues we can use for your Manchester bubble football event that we’ve used previously for plenty of satisfied groups. We can arrange your activity any time between 10am and 5pm throughout the week.

Situated in the north-east of the city near the Manchester Fort retail park, on-site you’ll find a licensed bar as well as a café and free WiFi. In terms of pitches, there’s six 5-a-side pitches and two 7-a-side pitches available for hire.

Just a short distance from Ardwick train station, this venue has ten 5-a-side pitches & two 7-a-side pitches, as well as a fully licensed bar on-site including a function room.

What Equipment is Used in Bubble Football in Manchester?

With this event, you’ll have 10 fully inflatable zorb bubble suits included, all blown up and ready to jump into on the day when you arrive! You’ll also be provided with team bibs and a host of footballs.

How Long does Manchester Bubble Football Last for?

With an average group size of 20, we run this event for around 60 minutes. However, this time can be slightly extended if you have a bigger group size in mind.

Rating 5.0
Joel H
2nd September 2022
Instructor was setup and waiting for us. Everything ran smoothly
Rating 4.0
Greg
22nd August 2022
We turned up a bit late due to traffic, but they wouldnt give us any extra time. Said they had another session afterwards.
Everything else was excellent, but would of liked to play for longer
Rating 5.0
James Witcher
3rd August 2022
Great experience on the bubble footy in Manchester.
Rating 5.0
Mr Roberts
16th July 2022
Stag weekend in Manchester. The gents thought it was a success, so winner winner. Plus they paid online themselves so I didnt have to collect any money
Rating 5.0
Mic Waters
7th July 2022
I sorted a double activity session with bubble active as part of the stag do in Manchester, and they were brilliant. Good and clear communication with some flexibility. Dan the instructor was up for a laugh. Reliable, safe, happy to recommend.
Rating 5.0
Alex
3rd June 2022
Fantastic experience by bubble active. Thanks to Emily for sorting it.
Rating 5.0
H Marsh
1st June 2022
Had a super time zorb soccer at Manchester. Steve handled a big group well
Rating 4.0
Isla
28th May 2022
Quite physical for a bunch of girls, but I believe I should of booked the bubble games not the football session, so my fault. Communication was great though.
Rating 5.0
Martin H
11th April 2022
Make sure you take water with you as its thirsty work. You rota between players which at first seemed rubbish but the bubble balls are heavy so its good to get a break and watch the other lads.
Rating 5.0
Geoff J
18th March 2022
Venue was a goals sport centre which had bar, changing facilities and plenty of parking. Great service from Emily, very happy chap
Read more/Collapse